Fly in a Spitfire 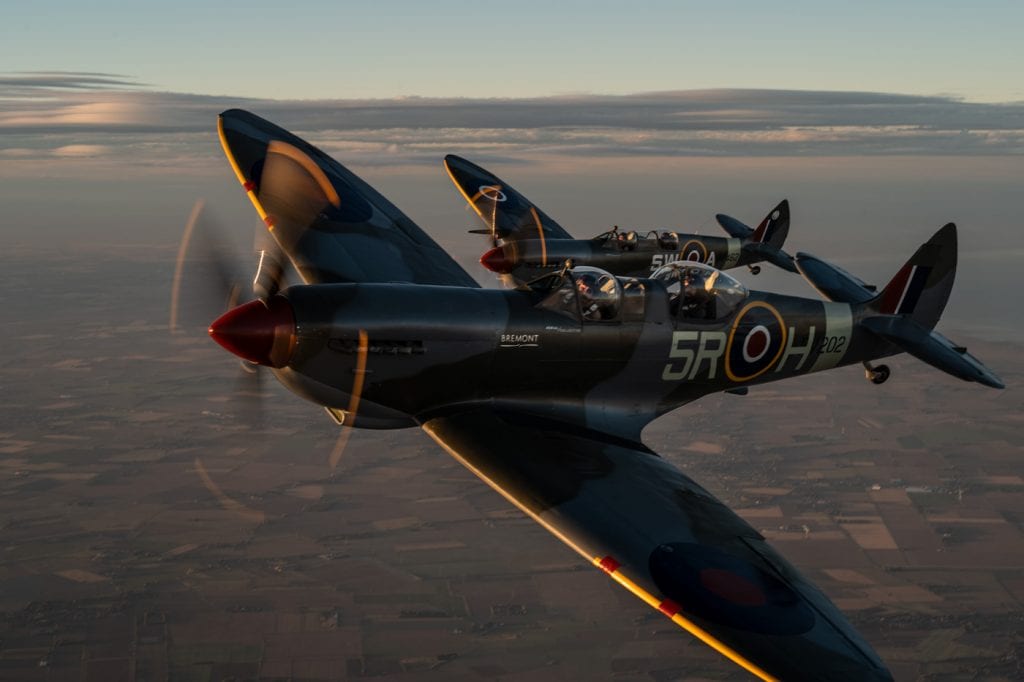 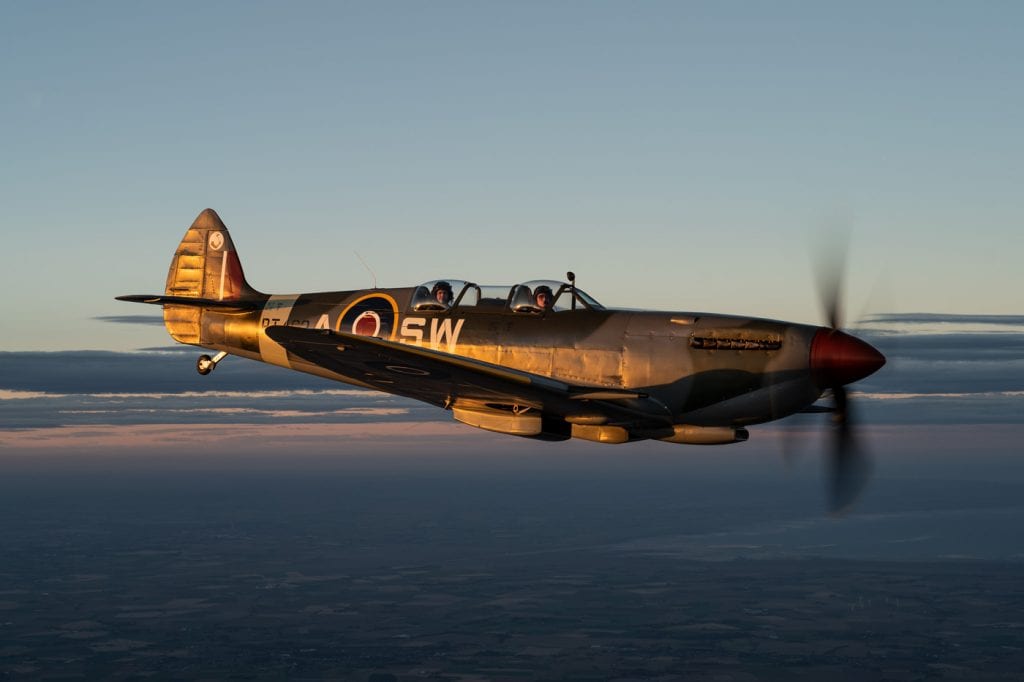 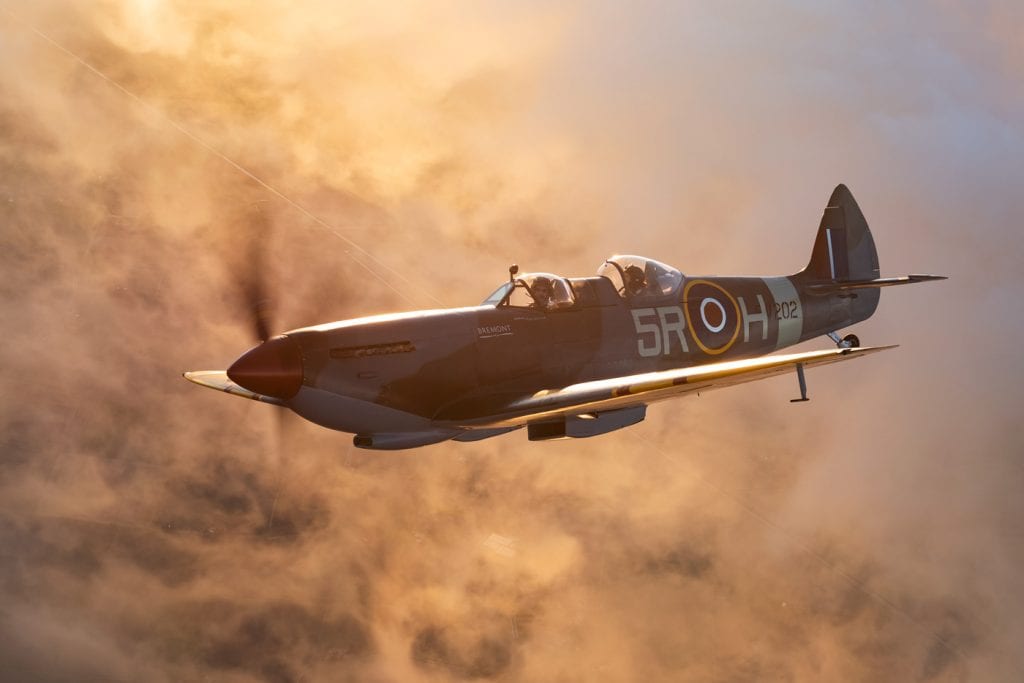 Dare to dream and take to the skies to fly a Spitfire aircraft that won the hearts of both pilots and the public in WWII. A symbol of Britain’s refusal to give up, the Supermarine Spitfire is an icon with unbridled horsepower, a fighter with heart and a joy to watch. So imagine what flying in one feels like…

You can book a Spitfire flight with Aerial Collective, discover how it feels for real, and create a moment in time you’ll never forget.

We operate two, two-seater Spitfires, both of which are lovingly maintained by the Aircraft Restoration Company on site and who both saw action in World War II.  Now they are responsible for sending passengers soaring as they discover the joy of flying in a Spitfire.

You can read more about their stories here or click ‘book now’ to discover our unique range of flight experiences.  Choose from 30, 40 and 50 minute flight experiences, or if you are looking for something bespoke then please give us a call and we will do our best to accommodate your perfect adventure.

We answer some of your Spitfire experience questions in our flight experiences FAQ area.

Writing this review isn’t easy. Why? Because there are just no words that could possibly come close to doing justice to the whole day. I flew in PV202 and had the honour of having Cliff Spink as my pilot.

What a guy! Utterly charming and captivating. I’m pretty sure the more you enjoy your day the more he does too and put quite simply – I lived my dream. I’ve wanted to do this for so long and the reality of the day surpassed by miles how good I’d imagined it was going to be.

It was the hottest day of the year when we went up. We followed a Hurricane once in the air that had departed a few minutes earlier. Both aircraft tipped their wings respecting each other before Cliff let me take the stick. They may have been gentle turns, but they were “my” gentle turns and I still nearly a week later cannot believe he let me do that. I certainly wasn’t solo but I was flying a Spitfire! We then did a couple of barrel roles (with Cliff at the controls of course!), above the hazy Cambridgeshire countryside before heading back to Duxford where we did a low and fast pass of the field before a Victory role and landing on grass. I could go on for hours.

My sincere thanks to Hannah and the team. She was the perfect host and nothing was too much trouble. The only reason I gave this review 5 Stars is that I can’t give it 10!!!!! Thank you Aerial Collective and thank you Cliff! And finally, to those brave airmen that flew her way back when, we should give thanks – for those boys were men…………

When I spoke to Cliff last July at the RAF100 Celebrations on Horse Guards Parade about the possibility of Zoe flying with him in a Spitfire at Duxford as a 40th birthday gift, with a lifetime in aviation I was under no illusion that a such an outcome could only be achieved if many factors came together simultaneously.

Well, those factors did come together last Tuesday morning and I wish to thank you all wholeheartedly for your part in making the visit to Duxford so memorable for the Westwood family in general and, of course, Zoe in particular.  She had a brilliant flight and we were most impressed with the slick operation at Aerial Collective, a determination to make your visitors feel welcome and your demonstration of the ‘Flexibility of Air Power’ with a quick re-hash of the programme.  It was indeed a wonderful day out.

Many thanks for the photos, they are amazing and give my thanks to Lisa for taking them, she did a fantastic job as you all did on my day.

Thanks to Cliff and his perfect flying for making it a day I will never forget.

Thank you very much for looking after me on my recent visit to Duxford to fly a WW2 Spitfire with Aerial Collective. I will re-phrase that, thanks for pampering me and treating me like a VIP. From the minute I walked through the gate I was assisted by Merill and directed to the hangar. Hannah kept me informed of what was taking place ably assisted by Lisa the safety officer. As the weather was starting to clamp in Hannah even managed to contact the pilot who said he would come early to make sure I did not have a wasted journey all the way from Devon. Coffee was always on tap, taken in a very comfortable waiting room.

Stu Goldspink the pilot turned up and we quickly ventured out to the venerable old lady waiting for us on the apron. Lisa did the honours of strapping me in and next thing Stu was winding up the Merlin. We were soon aloft and when clear of Duxford, Stu let me have control. Superb, she turned on a sixpence but you have to fly her by the seat of your pants. Stu then did numerous moves like rolls, hesitation rolls and loops. It was all over too soon and back to Duxford.

A truly remarkable experience and I can recommend it to anyone.

Hannah & Lisa – now back on terra firma I would like to thank you both for a wonderful day.  Having fallen in love with the Spitfire nearly 80 years ago I never dreamed that I would ever fly in one. So a big thank you to everyone, and especially “Rats” who let me take over the controls.  My family and friends are now eagerly waiting to see the video.

I loved my Spitfire flying experience with Aerial Collective. All the staff are very professional and caring and really pull out all the stops to ensure you thoroughly enjoy your day. There’s a private great tour of the hangar where they are working on various aircraft to bring them up to flying capability. The safety briefing is comprehensive and a bit of a reality check giving you a chance to change your mind should you wish to. The flight profile is whatever you want it to be subject to the discretion of the pilot. Aerobatic manoeuvres if you wish or just spotting the old aerodromes and features of the countryside; there’s no pressure to be a hero. Cameras fore and aft capture the flight in video for you. The sound and the smell of the engine are something quite unique.

Capture your adventure with our in-flight footage 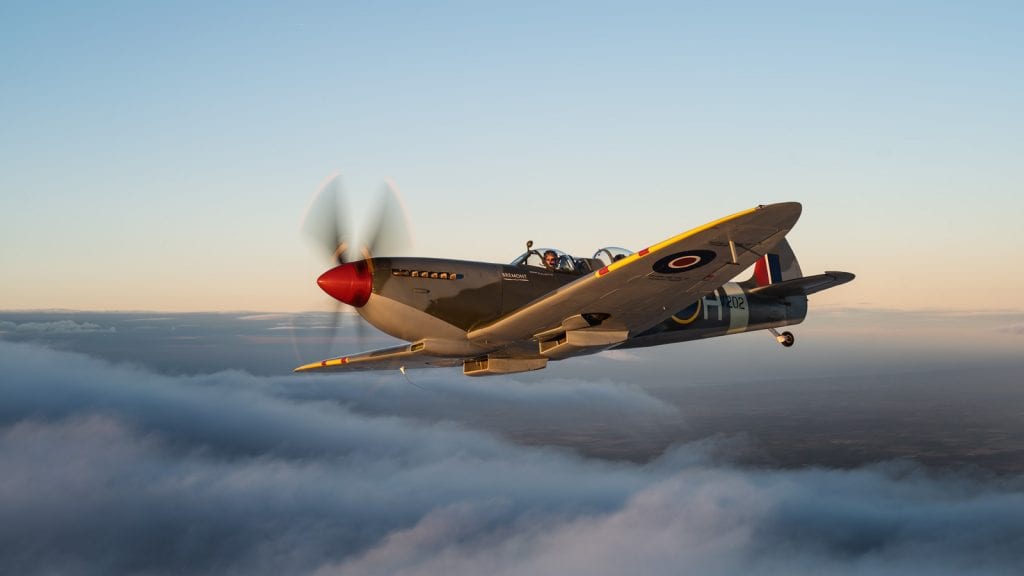 When you take to the skies for an adventure above the clouds in one of our two-seat Spitfires it will be an experience you will never forget, and now with the option to purchase video footage after your flight, you can relive it again and again.

Our HD cameras take footage from two angles, one looking into the cockpit to capture you in the moment, and one on the tail so can enjoy the elegance of the Spitfire in flight.  Should you wish to, you can purchase one angle for £60 or both angles for £100 for the full experience.   Your personal footage will be placed onto a USB and presented in an Aerial Collective gift box.  We are always happy to take the footage and there is never any obligation to buy.

Please see our terms and conditions for more information relating to in-flight footage.

The Spitfire’s speed, manoeuvrability and firepower turned this aircraft into a much-loved British
icon and it is considered to be the most famous plane of WWII. Its design and specifications are what
gave the British an advantage when it came to fighting the Luftwaffe in the Battle of Britain.

20,351 Spitfires were built in total, of these only 238 survived and 54 are said to be still airworthy. 30 of
these can be found in the UK and among those flying today are both our two-seat Spitfires, PV202 and
PT462, both of which saw active service during WWII and now can be found here at Duxford.
To get to fly in a Spitfire is simply a breathtaking experience as much as it was in WWII as it is today.

PV202 emerged onto the airshow scene in 2005 where it was distinctive not only for its then-unusual
colour scheme, but because it was the only Tr.9 to be flying in its original colours and configuration
at this time.

PT462 arrived at Duxford on the 30th April 1998 and returned to the air in the hands of John Romain on
the 5th of August after re-assembly and certification. It then spent a few years in North Wales with
Anthony Hodgson flying and being displayed in a variety of shows until October 2017 when ARC
acquired the aircraft and it became part of their fleet.

While these aircraft are no longer quite so active in airshows, they are kept busy fulfilling the dreams of
Aerial Collective clients instead; providing the opportunity to discover what it is like to have a flight in a Spitfire.

Want to discover more about our Spitfire’s history?  To learn about the journey from
their first sortie to now and the restoration work that brought them back to life you can find further information here.