When the time comes, and I hear that engine burst into life for the very first time, there will be a little part of me who will proudly be able to say mmm, I helped do a bit of that!- Lisa’

Well at 6pm on 8th August 2018, our Lysander’s 9-cylinder Bristol Mercury Engine burst into life for the first time since 30th December 1944, and Lisa couldn’t stop smiling.  It truly was incredible to witness 14 years of restoration work come alive, even more so for those of the Aircraft Restoration Company who had been part of it. 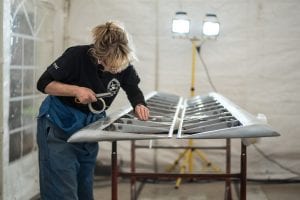 The Lysander, affectionately known as the ‘Lizzie’, was produced by Westland Aircraft and initially used in a co-operation role for the army, but with its low speed and altitude abilities the demands of modern warfare were too great.  Its excellent short field performance however, made it the perfect candidate for ‘moonlight missions’ for the Special Operations Executive.  Small improvised airstrips were used to recover or place agents and equipment behind enemy lines, all of which was only possible because of the Lysander’s STOL capabilities.

Some Lysanders were also used as target tugs for training in air-to-air firing.  They were often painted with brightly coloured stripes so they could be easily recognised and were in frequent use at bombers and gunnery schools.  This is where our Lizzie found herself in 1942.  Having served with the 613, 225 and 4 Squadrons, she was converted to tug status and shipped to Canada to serve at the Commonwealth Air Training Plan where she flew until October 1944.

In 2003 she was acquired by ARC and arrived at Duxford in unrestored condition, and the journey back to flight began.  20 days after that first engine run, the Lizzie was ready and in the capable hands of John Romain…

“The first flight of any restored aircraft is always a time of anxiety!  Being one of the engineers responsible for restoring the aircraft, including the overhaul of the engine probably does not help either as you keep trying to remember all the critical points that you covered, over a period of 10 years!

I had flown Lysanders before, albeit over 12 years ago, both the now Shuttleworth example, and the ex-Brian Woodford aircraft had passed through our expectations.  Therefore, I had experience of the high cockpit and ‘strange’ seating location the Lysander gives.

The engine, being a Bristol Mercury, also has its own unique operations manners but of course with many hours in the Blenheim and previous Lysander twin I am well used to that.

So, lined up and ready to go, a first fast taxi with tail up confirms the centre of gravity position is satisfactory.  The Lysander is very sensitive to centre of gravity and tailplane trim positions.  But all is well and so another run gets her airborne. 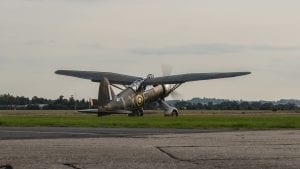 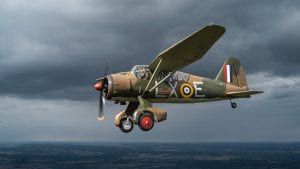 All is well as the Mercury pulls the aircraft into a steady climb into an orbit over Duxford.  She flies very well and it is not long before I am comfortable enough to experience slower flight and tilt the automatic slats and flaps – yes, automation, the pilot has no control over them!  Other than dictating the aircraft speed of course.

So, all good for landing and a nice curved approach puts her back on all three wheels on Duxford grass.

Lots of testing and adjusting follows, but the first flight in over 70 years is an amazing experience, if a little anxious”

After the initial flight her test schedule was completed and she was ready for her first trip.  This happened to be the Goodwood Revival where she came second in the Concours de Elegance.  Not bad for a first outing!

The Lysander V9312 G-COMM, is now well and truly part of the Aircraft Restoration Company’s fleet. She is believed to be the only Westland built Lysander to be restored to airworthy condition in the UK and represents what ARC is all about.  Breathing life into vintage Warbirds and keeping their history alive.