The evening of October 4th 2018 is one I will never forget: it was the day I flew in a Spitfire.  It was a cool winters evening with a clear sky, and I was stood in a flight suit about to climb into one of the world’s most iconic aircraft.  I had to remind myself to focus on the safety briefing and ensure that I would remember what to do in an emergency, whilst all the time my heart was beating faster.

Then it was time to climb into the Spitfire and get strapped in.  I was going to be flying in PV202 (G-CCCA), one of the two seat Spitfires operated by Aerial Collective.  As the steps were wheeled away I took a moment to take it all in; staring at the instruments and dials, looking up at the canopy around me and hearing the radio chatter from ATC.  We checked audio on the helmets and the engine roared into life.  The sound was incredible, I could feel the power of the engine, and it was in this moment I realised this is it; this is really happening.  I watched the propellers spinning round as we waited for the engine to heat up, and then before I knew it we had started to move.

PV202 sped up and got ready to leave the historic Duxford airfield behind. Looking out of the canopy I saw the earth fall away beneath us.  I knew the Cambridgeshire countryside would be a sight to behold, but I never imagined just how beautiful; I even saw King’s College, the spires of its chapel rising up out of the city.  We continued to climb and soon fields gave way to clouds, banks of white tinged with sunlight that made them look iridescent in the early evening light.  It was so tranquil and calm it felt like we were floating through the air and time was standing still.

Admittedly I couldn’t help feeling a little emotional, as I looked upon the curve of the wings cutting through the winter air, and remembered all the pilots who had fought and died for their country flying in aircraft just like this one.

All too soon the light was beginning to fade and it was time to head for home.  We descended a little, and as we neared Cambridge I could see the twinkling lights of civilisation stretching out before us.  The Aircraft Restoration Company hangars came into view and the Imperial War Museum aerodrome became increasingly visible. It was time to land.

Finally back on home ground we taxied back and the engine was shut off, slowly winding down with pops and clicks.  The propellers came to a slow halt therefore meaning it was time to open the canopy and step down onto solid ground once more.  I stood there for a moment, wanting to remember every detail, everything I had felt.  I’d been entirely unprepared for just how amazing it would be, how humbling and how completely unforgettable.  As the sun set over Duxford, bringing the day to a close, I watched birds soaring up above me and knew exactly how it felt. 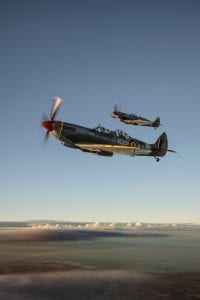