The Bristol Blenheim is a truly unique British aircraft. As a type, the aircraft’s history is long and formative and an important milestone in British aviation. Designed as a small airliner in the early 1930’s by Frank Barnwell, Chief Designer of the Bristol Aircraft Company, and funded by Lord Rothermere.  It proved much faster than the latest biplane fighters, with a speed of over 300mph. Rothermere named it `Britain First` and promptly donated it to the nation.

Barnwell redesigned the aircraft as a bomber and it became the first stressed skin aircraft with hydraulic actuated undercarriage, flaps and turret to be accepted by the Royal Air Force. It was the fastest bomber of the day and became the backbone of the RAF’s light bomber force. At the start of WWII the RAF had 1089 Blenheim’s in service, more than any other type.

With the other RAF bombers being switched to night operations, the Blenheim bore the brunt of daylight operations during the early war years, with the crews paying a heavy price. Operating at low level many Blenheim’s were lost not only to fighters, but to anti-aircraft fire, especially when attacking ships. Even so, it was well liked by its crews and Churchill paid homage to their bravery comparing them to the `Charge of the Light Brigade`. Churchill’s famous speech `The Few ‘also paid homage to the daytime bombers.

The Blenheim was pressed into many roles for which it was not primarily designed, such as long range and night fighter duties. It became the first radar equipped night fighter and got the first kill using that equipment. It also played a significant part in the development of radar, paving the way for the faster more heavily armed aircraft that came later. 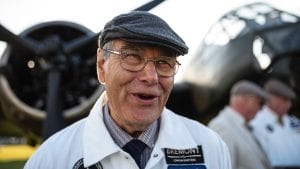 ARC`s first Blenheim project, a Canadian licensed built MKIV, which they called Bolingbroke, was recovered in a derelict state and restored to fly after a 12 year rebuild by a small dedicated volunteer team, led by licensed aircraft engineer John Romain. It made its debut in May 1987 only to be destroyed in an accident exactly one month later, suffice to say that the accident was not due to a mechanical fault and fortunately the crew survived the accident.

Determined not to be without a Blenheim, another airframe was found and the same team gave themselves five years to complete the project with the aircraft flying in May 1993. It became the only flying example of a Blenheim, representing the light bombers of the early war years. Flying for 10 years from Duxford on behalf of the late Graham Warner, the aircraft was well known on the air show circuit building an enviable serviceability record amongst the vintage aircraft fraternity.

In August 2003 the aircraft suffered an accident whilst landing at Duxford, again through no mechanical fault with the aircraft. The damaged aircraft was dismantled and stored with the ownership subsequently transferring to Blenheim (Duxford) Ltd in December 2003.

After 11 years  of painstaking work, on the 20th November 2014, Chief Pilot John Romain and James Gilmour as Flight Engineer took Blenheim MKI(f) on a successful 26 minute maiden test flight at Duxford.  Following some minor adjustments a further two test flights were carried out and successfully completed its `Permit to Fly` tests.

Bristol Blenheim MKI (f) L6739 (G-BPIV) is now back on the air show circuit bringing grace and elegance to the skies whenever she flies. 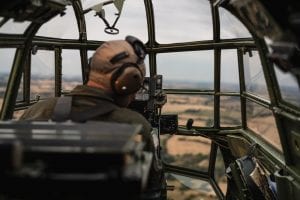