On Wednesday 23rd of January 2019, we were honoured to welcome Anna Meredith and her family into our hangars at Imperial War Museum Duxford to meet the Lizzie. 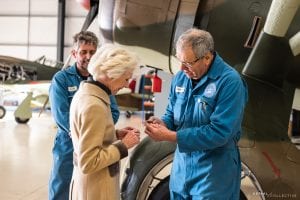 Anna is the daughter of Squadron Leader Ian Grahame Stewart, DFC AFC. Over the course of The Second World War, Ian flew our Lysander (V9312) on more sorties than any other pilot, carrying out everything from reconnaissance to dive bombing in the aircraft whilst serving with 225 sqn. 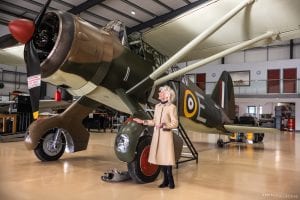 After having the privilege of reading through Ian’s logbooks, it is fair to say that his flying achievements throughout his RAF career were staggering. He amassed over 1000 hours of wartime operational flying across numerous types from Lysander to Hurricane, Spitfire to Mustang and even the occasional Airacobra and Corsair to name just a few. Over his career Ian was awarded both the Distinguished Flying Cross and the Air Force Cross, the first of which also came with a mention in dispatches for his display of skill and courage. 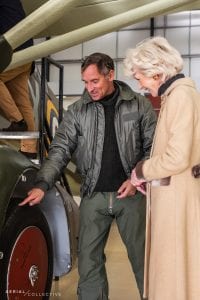 The excitement of turning the logbook pages and reading the incredible memories recorded within them is brought to a sudden and harrowing end. The page containing just half an entry is eventually reached, beneath which lies the sinister, red ink stamp, which simply states ‘Missing, Presumed Dead’. After half an hour of reading through the logbook of Ian’s war, nothing can prepare you for the emotions you feel when first confronted with that red stamp. It remains one of the most humbling moments that we have experienced at ARCo. 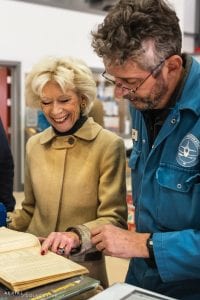 Ian was shot down and killed in a Mustang IV whilst protecting a formation of Mosquitos from FW190s in 1945. Less than two weeks later, Germany surrendered and the war in Europe was at an end. Anna was just two years old when her father was lost.  We cannot begin to imagine the emotions that Anna felt during her time with us, however, we hope that both she and her family enjoyed the day. To see her place her hand on the original controls that her father would have held and operated through all those sorties brought a lump to everyones throat. To the Lizzie it must have felt like the first meeting of an old friend, the indescribable familiarity of a companion from a past life. 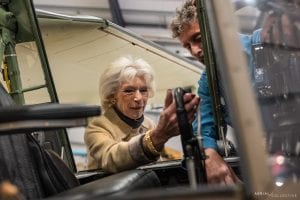 We would just like to say a huge thank you to Paul McMillan and Col Pope, without whom this meeting would never have happened. It is only down to their sheer dedication and research that this connection was found so thank you gents. And lastly, a heartfelt thank you to Anna and her family for both agreeing to come in and for allowing us to document the experience. 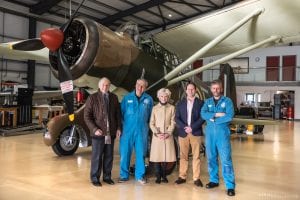